What is a telescopic hydraulic cylinder?
2021-11-11 作者：Datong Hydraulic

Telescopic hydraulic cylinders, sometimes called multi-stage cylinders, are a type of linear actuator consisting of a series of tubular rods called sleeves. The sleeves (usually four or five) sequentially decrease in diameter and are nested inside of each other.Once hydraulic pressure is introduced to the cylinder, the largest sleeve (called the main or barrel) is extended first. Once the barrel has reached its maximum stroke, the next sleeve, usually referred to as a stage, begins to extend. This process continues until the cylinder reaches its last stage, called the plunger.

There are two different types of telescopic hydraulic cylinders—single-acting cylinders and double-acting cylinders. Single acting, by far the most common, work by using gravity or some other external force to retract the stages of the cylinder. As soon as pressure is released from the cylinder, the force of the load pushes oil out of the system and the cylinder retracts.

While pneumatic telescopic cylinders exist, hydraulic power is much more common, especially when heavy loads are being moved. With a collapsed length typically between 20-40% of the fully extended length, telescopic hydraulic cylinders are used when extension needs to be originated from a tight space. This extension capability creates a longer working stroke than would be possible with a single stage rod-style actuator. These capabilities, along with the power to handle very heavy loads, make dump trucks, lifts and garbage trucks some of the most common applications for telescopic cylinders. 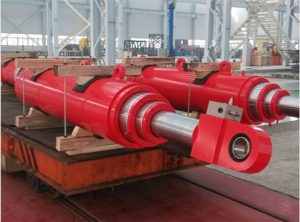