The piston rod is processed by rolling, because the surface layer has residual compressive stress, it is helpful to close the surface micro crack and hinder the expansion of erosion.It can improve the surface corrosion resistance and delay the generation or expansion of fatigue crack, thus improving the fatigue strength of cylinder rod.Through the rolling molding, the rolling surface forms a layer of cold hardening layer, which reduces the elastic and plastic deformation of the contact surface of the grinding pair, thus improving the wear resistance of the cylinder rod surface and avoiding the burn caused by grinding.

After the piston rod is processed by rolling, the reduction of surface roughness can improve the mating properties.At the same time, it reduces the friction damage to the seal ring or seal when the cylinder piston moves, and improves the overall service life of the cylinder.The rolling process is a kind of high quality process measure, and the rolling effect is proved by taking the 160mm diameter jingdr brand cutting the rolling head (45 steel seamless steel tube) as an example. 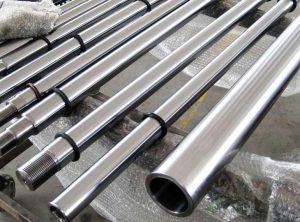